When lately we watched the news on television, the Internet, the news media or others, quite sad also to hear the news about the fighting between youth, juvenile delinquency, and even crime committed by rogue elements who are still relatively young and productive age , Due to curl up by the mass media, it is as if it is cornering the Indonesian youths in general and the youth in particular Sumbawa.
And Thank God, at Sumbawa this, there is still a lot I found examples of young entrepreneurs (young entrepreneur), who still behave well, soulless unyielding and not whiny, and that is enough for a thumbs up, a sense of want to eliminate shame for self-employment, trying, to do business, to work so they can earn money and create jobs, examples include youths who cultivate the following business. 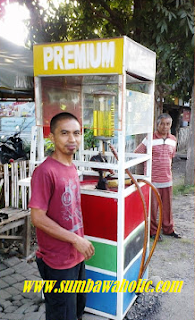 For me, that is no less interesting is the phenomenon of the emergence of many Petrol Stations Mini or Pertamini in the town of Sumbawa Besar. Whether related or not, to my knowledge used in college in Yogyakarta, precisely in the area Sombomerten, south Maguwoharjo, 2006's there are sellers retail gasoline that make such depot small gasoline reads Pertamini (still extant), although by pouring the manual with cans and bottles. Over time, in Sumbawa Besar about a year ago, first appeared near the traffic light Lawang dig, near SMK Al Maarif, then after that proliferated well up to now, the number has reached hundreds, but to make a pom mini must be issued cost of more than 6 million. For me it was startling but also boast, how not, which is absorbed into the workers there are young people who have graduated from the school, there is even a sideline because they go to college.

My observation, because it is supported by the facilities of a small pump sizes of more precision, and looks neater, then here, one of which was the main attraction of customers to buy gas at the gas station mini, but it is because normally due when the buyer got Pom gasoline Pertamina gas station, the queue was long, so that consumers switch looking for a practical and easy to reach, and the price is not adrift lot, that this mini petrol stations as an alternative.
Hopefully things have been running well maintained, to provide good service because it is needed by motorists who ran out of gas.


2. The growing phenomenon of Internet Cafes

Recognized or not, behind the proliferation of cafe-cafe in Sumbawa is not separated from the roles of youth, what does not, in addition to financial support for capital, the spearhead is the young men who have IT skills. As I recall, around 2006, in the town of Sumbawa Besar, there is only one cafe, namely Gaul Net, which is located on Sumbawa PLN Branch Office, even after it was closed, but it is the forerunner to the emergence of many Internet cafes in this town of Sumbawa Besar. At that time, hourly rental fees still Rp.11.000, - which is still relatively expensive, only those who really need it, for example, journalists and students, who want to come and pay dearly for rent 1 Hour ngenet there. As school-junior high school subjects of ICT, and in SMA / SMK no lessons KKPI, the interest in surfing the greater, so after that there comes Buddhism Media Comp in Jalan Cambodia (now closed), then Balanet at seketeng, Internet Cafe Revo Mandiri Simpang Horse Statue, Pasa.net in Kebayan, Pitstop in London and after it developed an incredible mushrooming number of Internet cafes in the town of Sumbawa Besar this, like every word we walked 100 steps, then we can find the cafe. This course provides employment quite profitable and promising for the young men who are willing and able to use the IT world, especially the Internet, which must be supported by the ability to use software and hardware to complete a cafe. As well as the education world tat anyway, especially in vocational, opened TKJ and Multimedia department, so no shortage of youths who are already skilled in the use of computer hardware and software. Additionally supported by PT Telkom, which is almost the most part, the cafe -warnet using his connections, especially through the speedy connection and Indihome.
So it would be wise, if it is already running were developed and supervised their use, for things that are good and benefit the people, because the Internet is like a double-edged sword, if people really use it will be useful and beneficial, but if people misuse it will hurt, especially the number of sites invasion of pornography, violence, gambling and sadism. Children who are already addicted to playing games, should also be monitored, so as not to forget their duties, such as school and help their parents. Thus we must be proud of them - they are the Youth Entrepreneur in Sumbawa, which will support the advancement of Sumbawa. Proceed continue youths Entrepreneur Sumbawa .... keep innovating and creating.