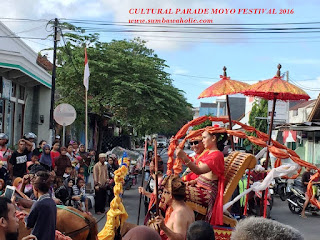 An area that is already developed its tourism, the average always develop the potential of the territory. Among others in the field of art, culture and various crafts typical of the area, so it can be introduced to all corners of the world, so that the visitors would come to the city. Likewise in  sumbawa besar City which is one of the region began to advance and crowded, certainly do not want to miss the other regions in promoting the development of tourism potential of the region is quite diverse. In addition to the improvement in tourism infrastructure facilities, also perform a variety of activities that support tourism in Sumbawa. The activities that will be carried moyo festival, cultural parades and so forth.  Activities Moyo Festival, had an annual calendar event, organized by the Office of Dispora Budpar Sumbawa. The objective of this event is to showcase the diverse cultures that can support existing tourism in Sumbawa. One of the activities in this event, is the Cultural Parade, for the year 2016 was held on 28 of September 30, 2016. s.d Cultural Parade is categorized participants to kindergarten / elementary school, students SMP / SMA / SMK and General category.

Cultural Parade of their activity, is expected to attract tourists, both domestic and from abroad. It was certainly a hope with the people of Sumbawa, due to the number of tourists, the economic value obtained will also be increased, from a profit providers of transportation services, accommodation or hotel, food and snacks, souvenirs or various souvenirs Sumbawa could be offered to tourists as souvenir when they return from Sumbawa.
Cultural parade enthusiastically followed by all the people in this Sumbawa, make the crowd that is expected to attract tourists, both domestic and foreign tourists. For the current transport to sumbawa already quite smoothly along their flight path is served by several Indonesian airlines, although they use a small plane because the airport runway is still short, not enough to qualify when coming boeing aircraft type. 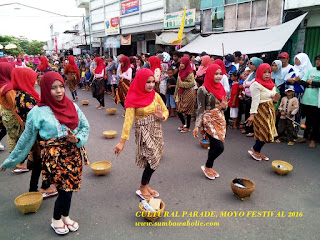 The unique thing of Cultural Parade this time is, the group of participants to show a variety of themes, stories, legends from Sumbawa ground, so it can be known by the public and tourists, about cultural diversity, especially on folklore are quite numerous and varied. So if you one day visit to Sumbawa, may be more memorable when there are festivals moyo fitting this. So that you can make wonderful memories, so that if one day there will be a friend or family traveled to Sumbawa, it can be recommended to be more interested. More and more tourists visiting Sumbawa, it will add to the wheels of the economy in the field of tourism in Sumbawa, which can provide benefits and income for the people living here.