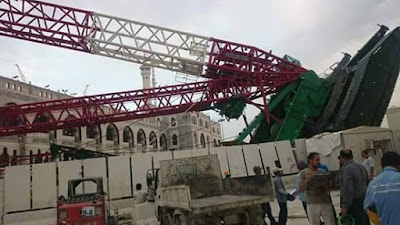 Innalillahi, wa inna illaihi rojiun ..... It is very surprising news from Mecca, Friday 11 September 2015 yesterday, portable crane used in the construction of the Sacred Mosque, suffered a collapse, so that befell the building and the pilgrims who are running their daily prayer maghrib. Inevitable death toll fell, died last data 111an people from various countries, and 11 are from the Indonesian Hajj pilgrims.
We are very concerned with this condition, although the accident is not separated from the wind and rain storm that hit the city of Mecca, but it should also be held responsible of the Saudi government about this incident. There should have been when the Kaaba was in ziarahi pilgrims perform the Hajj, should have been resolved or temporary construction heavy equipment, must be removed first, because it is obviously very dangerous pilgrims who come from around the world.

State of Indonesia is a country with the largest Muslim world, and the dispatcher pilgrims highest since reaching 200 thousand pilgrims per year, it is proper, demanding attention and guarantee the safety of the pilgrims Indonesia, so the future is no longer the sloppiness of the Authority there, which brings death toll as of Friday last, because a few years ago have also been events that took its toll tunnel mina 200's of people died. And such an event had occurred several times before, and also many of the pilgrims Indonesia claiming that being a pilgrimage there. Therefore, once again we are in Indonesia hopes that the traffic regulation system pilgrims and security is also increasingly be increased so that the pilgrims who followed the millions of people a year to run smoothly and full of wisdom.

Wallahu alam bissawab ... God're testing, I hope Muslims can cope with this problem, but perhaps also as a correction and rebuke to Arab countries, should be sacred ground is not feasible to eliminate the historic sites of Islam, with built-story luxury hotels high, skyscraper style westernized .... may be food for thought ....