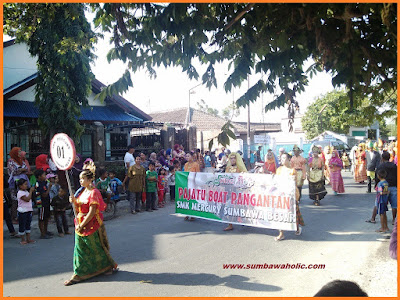 Moyo Festival parade this year 2015, a routine that has been held in Sumbawa Besar, thus supporting tourism programs that already exist, and was followed by schools, institutions or social organizations that exist in Sumbawa. The parade this year themed wedding traditions wedding in Sumbawa, resulting in the parade this time, the display is a wide range of distinctive clothing traditional sumbawa worn by the bride, attendants, carrying various objects ceremonies wedding, invited guests and enlivened by the presence of various arts, such as marching Band, Dance Art reog by Harmony Residents in Sumbawa Java and others.

Although not all required to participate, but the enthusiasm and participation of the public is quite high, causing moyo 2015 festival parade is quite lively and the number of participants aplenty. So that was held a few days with certain categories. There are categories of public, government agencies and schools, and harinyapun distinguished between high school / vocational school, junior high and elementary school, to be more organized and orderly, the route also adjusted age groups are much nearby 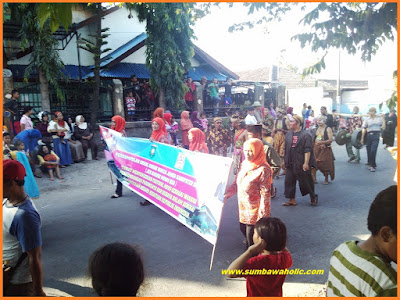 Active participation also come from various communities in the city of Sumbawa this, because we know here are ethnically diverse there, mingling together as citizens of the town of Sumbawa. There were drawn from the community pillar residents Java, Lombok, Bima, Sumba NTT and others, who eagerly participated in the parade this time. Togetherness and brotherhood is very beautiful, to create an atmosphere of peace and quiet, so that all activities can run smoothly, the construction continues and the economy of the community also progressing and rising.

You want to see more, festive parade, please note the photographs and video - video parade of some contingent participants Festival Parade Moyo 2015 below, may add to the splendor of the world for tourism in Sumbawa, and siuatu day into an event eagerly anticipated by the public du Indonesia and the world to enjoy and watch .......