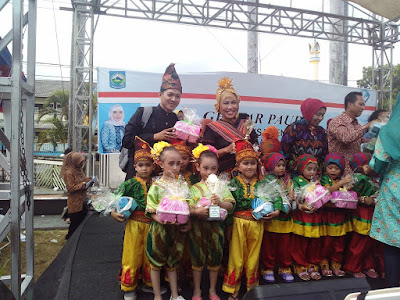 Outstanding ..... after a long journey, came the struggle of children who are members of the new creation dance team, racing the final round of the province of West Nusa Tenggara, which carried out the building housed yard Dikpora Prov. NTB 26-27 August 2015.
After the show opened with devile participants, coming from 10 counties and cities in the province, then the show continued with New Creative Dance Competition, Singing Competition and drawing competition which was held simultaneously at the same instant.

Finally, after carrying out stage, and get a very objective assessment of judges, the new creation dance team whose members Aimi contingent Sumbawa, Khansa, Halida, Ershad, Dhanis and Alip, as well as Master & amp; Dance Coach Bp. Eko, succeeded as 1st New Creative Dance Gebyar ECD in 2015, maintaining last year's feat as the defending champion. So it is not in vain and anakp young coach is always routine practice almost every day, to prepare as best as possible in order to perform well and eventually became champion. Thus we also hope, achievements that have been achieved at the provincial level can be maintained even if you can reach the national and international levels. Creative activities and beneficial to mental development of these children should continue next year as well as possible, in order to create the next generation who has creativity, art and a good mentality. Long live the art world and continues to Indonesian children I hope you will become a human being useful for older people, the state, nation and religion homeland. Because after all education is very important for children who tomorrow will become the next generation as leaders of the people, is expected to have a good mentality forged early on. so that one day when he became leader, will be a leader who can protect the public, memeintangkan public interest, are not concerned with personal and group interests, which ultimately tend kurupsi, collusion and nepotism, as at present it is a bad thing dipemerintahan Indonesia, where many-leaders leaders caught the problem of corruption is harming state finances, which it is possible because the coaching mentality is not good when you were kids. Long live and move on the world of children in Indonesia. Ameen.