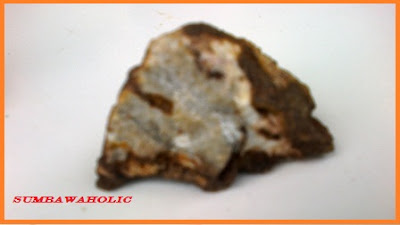 Not long ago, is still around Labaong, precisely in Bukit Maja, there is a fairly new site visited by people crowded to mine anyway, supposedly due to its gold content is much better than the previous. There are some examples of the Mount Maja rocks containing gold. Pictured above is one of the rocks on the island of Sumbawa which has a gold metal content. Sumbawa Island is one of the islands in Indonesia that have a natural wealth of minerals, ie gold mine. this has been a long time in trying to be exploited by other nations, including Indonesia, the Dutch colonizers nation. Traces of mining Dutch era still exist to this day, and finally passed by companies from abroad like Newmont corpooration of the United States. Finally, a gold mine that is big enough we can find on the island of Sumbawa is precisely in the area batu hijau who entered the district Sumbawa Barat. The results of mining there is said to not only gold, but there are copper, tin, nickel and even reportedly also produces uranium. Sumbawa mean how rich this earth, so that should actually benefit society in Sumbawa and more prosperous than the location of these mines.

Only now in, the result of a mine run by the foreigner, obviously can not be entirely to the prosperity of citizens Sumbawa, because the percentage is large clear to foreign private companies, while for the results go first to the central government, and then the local governments that less, so just a lot of mining regions this citizens live below the poverty line, it is ironic indeed. For it is only fitting the central government made a decision in favor of the people, by not extending the contract of employment the foreign company, then managed by the state or work with mining companies on the domestic credible to manage the mines in their own homeland, in order to improve welfare for Indonesian citizens. If welfare is reached, by itself the state of Indonesia will be advanced and modern country, because it has the financial ability to reach that goal, by improving science and technology in Indonesia.

Some time ago, around December 2010, in Sumbawa, precisely in Bukit Labaong, people troop to mine gold. Thousands of people come from all over Indonesia to try his fortune and luck to get the precious metals or gold. Some are successful, but many others do not get the gold, in accordance with expectations. The existence of illegal artisanal mining that tend, in fact could not be separated from government  policy  less in favor of the people earlier. So that society as a standalone mine gold in the local area itself, in a simple way, but the gold that can be used as additional income, from previous work as farmers, laborers and others. Many people who had the opportunity to mine own, using a tool glondong process to separate gold and land, by having its own or lease to others, because there are many people who do activities renting the equipment. In addition the seller mercury coming from Surabaya, also earn more profits, because the initial time is still worth four hundred thousand perkilogram, but when mining in Labaong is increasingly widespread, even the price of up to one million five hundred thousand rupiah per kilogram, though expensive still there are people who are trying to buy it.

Because mining is haphazard workmanship also, finally on mining in this location had killed a human. Several people died and could be evacuated, but it seems there are hundreds that could not be evacuated because buried in the soil of the tunnels they create eventually collapse. Menerut outstanding news of the miners who came not only from the area of Sumbawa, but none came adari island of Lombok, Java, Sulawesi, Kalimantan and Sumatra, almost from all corners of Indonesia caused the news fairly widely heard, that the content of gold in this hill carat value is very high and expensive when sold. Over time, after the tunnel collapse incident and the decreasing revenues from gold mining community, finally is getting low tide is also the number of miners who hang in there. Even today can be said to be very quiet because only a few people who remained set up tents and mine gold there. But about the mythical legend that surrounds the hill Labaong, and the golden age of mining around the year 2009, into the stories and legends that is not exhausted by the time, and maybe someday again will bloom again, in line with the changing times. Wassalam.