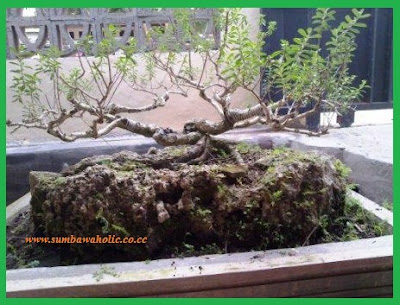 Greetings bonsai for the fans and hobbyists all over Indonesia and in the world, we are only just a little biased to participate, but we believe the future can also speak of this bonsai world arena. Although not yet as good as going to bonsai that there is elsewhere, we will still try and vibrant so that the tree - this tree we can form a good bonsai work. Maybe if you are a fan of bonsai in America or in Europe, which already has a collection of bonsai of various types of plants, but yet has particularly detainees Santigi / Sentigi (Phempis Accidula), there is no harm if you one day being travel to Bali and Lombok, while coming to Sumbawa to get this tree species. Sbab other areas such as in Java, the tree is already scarce because of the long hunted bonsai enthusiasts so exhausted, if there is currently in Java into the protection or conservation in national parks is prohibited unruk taken. While this Sumbawa area, when even this is still there, even though it is not much at all, but we could still easily get it, because it is in sumbawa still forest, which blends with mangrove forests.

But you do not need to get there, in the city of Sumbawa Besar still easily we meet people who are planting this tree in front of the house as a potted ornamental plant alone, has not made a manicured bonsai becara right, so that when we purchase price is not yet expensive. The bottom line sumbawa can still easily we get the seeds or bonsai Sentigi going, because there are many who have it. Although it has long, many hunters these trees coming from Java and Bali, but until now there are still Sentigi tree's existence. Moreover, a few moments ago when it held exhibitions of bonsai ASPAC in Bali, supposedly tree that champions the owners of Surabaya, said tree Sentigi derived from Sumbawa, so that adds vibrancy to the local enthusiasts and beginners to plant trees Sentigi, and then the people here had followed the fever Santigi.

Slightly below this is going - going bonsai santigi that we have and collections, and still will grow and continue to grow, for we can make for our pride in the arena perbonsaian in Indonesia in particular. Greetings Bonsai ... ... ... 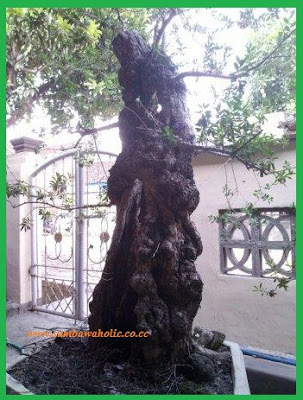 We hope that in the future, fans of the more advanced bonsai in Sumbawa, and collections bonsainya can take part at the national level, with the contest and exhibition of bonsai at the national level. especially if you can get the championship title, will certainly boost the prestige Sentigi of sumbawa that will eventually make the price of bonsai Sentigi of Sumbawa will rise, so that the local bonsai enthusiasts will get the satisfaction and economic benefits. This time also in sumbawa many trainers are skilled and has been a national standard, belonging to PPBI, originally from BAli and Lombok but now lives in Sumbawa, to advance the world of bonsai here, as well as their living from their bonsai, as well as do not forget to also share their knowledge about bonsai to local enthusiasts and beginners who are here, so that more qualified and understand about the world of bonsai to the problems in the philosophy of bonsai.

Jayalah kept bonsai world Indonesia and in Sumbawa, may contribute seeds bonsai Sentigi that has been taken from sumbawa brought to the island of Java, eventually can become a bonsai of high quality, as well as being able to prove to the outside world that the bonsai of Inonesia not lose quality with bonsai plants from other countries in the world today. Respectfully.