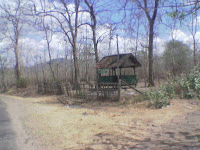 If you are in Sumbawa, if you are traveling towards the direction of Moyo Hulu or go to the Batu Bulan dam, you will pass through a landscape that is natural, namely through the oak woodland, which is located in the Village Boak, District of Hulu Moyo, Sumbawa regency. These forest is one of the many teak forest in Sumbawa. To reach these area, are all within a few minutes from Sumbawa Besar City, because only a distance of about 6 km course. If you've reached the fork in the road, straight toward the direction of Dompu - Bima, you must turn left toward majors Moyo Hulu. We have teak forests in place, the trees is experiencing wither , ie all the leaves fall - the leaves, due to the influence of drought long enough.Until now, local weather Sumbawa not experienced rain, but was frequently overcast sky continuously. The teak forests is actually owned by the government, which is managed by Perhutani, past teak trees very broad area, but since the end of his land title already banayak are turning to the community, then by itself teak plantation area narrowing anyway. Dense visible on the front, but in fact when viewed as a whole is getting a little bit. Existing areas of teak forests like this are not only in the region this Boak, but the direction is more to the east of the city Sumbawa Besar, precisely near the village Serading, there is also a teak forest areas there, acreage also more or less the same. Also look heavy viewed from the front, if we go after the security post straight ahead, less than 2 km has entered into paddy fields and including BoakDalam Village area, which is already a human settlement. It is said that time are still around knowledge sumbawa 90s in this still includes forested, so to get a nice teak, or other timber for building materials is still very easy to obtain. Even many who were transported to the island of Java was taken up by people who wander diSumbawa, then to create the pages in Java kampong houses there. But over the time, especially when in 1998, when Indonesian political instability marked by the alternation of the reins of the new order to the order of reform, then it was also looting massive oak tree in Sumbawa, so after year two thousand, teak trees near peerkotaan already esmakin bit. But when we headed inland areas still, just as to the area Ropang, Lantung, Dodo Rinti, Lenagguar, Lunyuk, Orong telu, Lawen and so forth, in fact there is still quite dense forests, 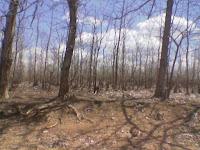 At the very least, the existence and survival of teak forests can provide a separate panoramic make memorable to the viewer, as you walk through the area. When the dry season like now, we can see a view of the teak forest was bare as leaves shed to reduce evaporation of water in stems and roots, and this is one way of teak trees to survive due to lack of water supply can be absorbed by the roots. But when the rainy season, this teak forest we will find lush natural scenery, as well as lush and cool when we are below it. When the season like some shade, often used as a place to rest for a moment, by all road users, especially those from out of town or road users who are long distances between cities dlam province and outside the province. because we know Sumbawa regency is quite extensive, memankjang of Alas area to the east past the town of Sumbawa Besar will get to the area Tarano a distance of about two hundred kilometers. Maybe if in the island of Java, we are running 40 to 50 klilometer it has changed the district. Even if you go to the city of Sumbawa Besar of Bima, or at the eastern end of the island of Sumbawa to the region's Sape distance of approximately 300 kilometers, roughly equivalent to the distance from Yogyakarta to Surabaya. Therefore, many bikers and cars that utilize huts or temporary resting place around the teak forests to take a break eliminate fatigue, a stone and then move on again.