Maybe you already Komodo animals often see on television, which the NTT on , but when you come to , you will not see the Komodo animals, but animals that biawak other reptiles. Biawak is a compatriot of reptiles into the big lizard, tribal biawak-biawakan (Varanidae).

Biawak in another language called bayawak (Sunda), menyawak or nyambik (Java), berekai (Madura), and a monitor lizard or goanna (). Biawak which is found in the villages and urban areas in western is the most water biawak of Varanus salvator. Body length (snout to tip of tail) is generally only about 1 m less, although some are able to reach 2.5 m. Biawak generally occupy the edge-edge or the river channel the water, the lake edge, the beaches, and swamps, including mangrove swamps. In urban areas, often biawak also found living in channel water to the river estuary. Biawak can eat various insects, crab or crab, various types of frogs, fish, lizard, birds, and small mammals such as mice and mouse. Biawak clever swarm tree. In the mangrove forest, biawak often steal eaten eggs or nestling. Biawak also eat carrion, turtle eggs, turtle or buaya.In , Les Uti Tama Rentek, which means the same, or little difference between the UTI and Rentek, so there is the term, in this case is the type, but between UTI and rentek also have different patterns and texture of the skin. Because there are many in number, on the road - the road in the countryside or on the fringe of the forest, we often see animals biawak is kill by vehicle wheels so dead. Events for the community here is just a normal occurrence that is not too see. But actually, when in district for example, in Java, the animal has become something sought by the lovers of reptiles to be, as the electrical current from the hobby of keeping reptiles that have been trend, so that type of than any reptile Iguana, many start to collect, including animal biawak.

In addition to fulfilling hobby, in fact it is one way to preserve the viability of animals. This is due, because the animals have started biawak exploited by people - people to use as materials in making handicrafts, such as bags, shoes, wallet, key holder, and so even consumed by the people - people with the reasons for drug skin disease. When I was first a student in Yogyakarta, around an 90-year, precisely in the area of Malioboro shopping street, I encountered some key decoration of foot biawak that price at that time, about twenty-five thousand, is also quite expensive to exchange money at that time. From there it was also economic value, but needs to safety, the need for human wisdom of their lives, for example, in a way to cultivation, as has been done against the other reptiles crocodile to cultivation the first taken for the skin. 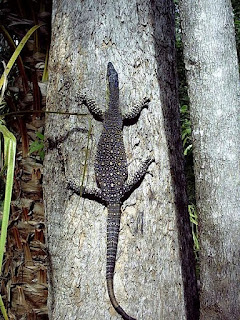 It is also possible, because human resources there, many that can process and preserve a variety of animal skin, and even have academy a leather tannery learn how the engineering colleges in the skin, so that graduates - graduates from there, many who work in the factory - shoe factory and became a businessman engaged in the field of production of commodities derived from the skin. Hopefully when the viability of these animals still remain sustainable and can be found by our children and grandchildren as a priceless heritage that is not price.